Letter #174 comes from Gracie in England.She is originally from the city of Nottingham in the Midlands.She is currently taking off a year before going to university,so she is currently volunteering in the city of Chichester,caring for a lady in a wheelchair.She will be going home in a month and is so excited since her temporary home is 5 hours away from her family,so she rarely sees them.

As many may already know,Nottingham is where Robin Hood is from.There seems to be some controversy over where he is from.....many people say he is really from Yorkshire,so Nottingham may have no claims to him,although they do brag about having his statue there. ;)

Most of the wealth of Nottingham came from manufacturing lace and also bicycles later on.Now the lace maker buildings are used as a college since they are so beautiful.Gracie did her "A-levels" there.She said that homeschooling is very uncommon in England and that kids must attend school until age 16,but they are going to be increasing the age to 18 years old.When Gracie goes to university,she plans to study Englis and French.She will be going to university in London and is excited about it!It will be so different from where she is living,doing her volunteering work.Chichester is in the countryside and when she moved there in January,it was very cold and she thought it was so boring because nobody ever left their home,so the town seemed so empty.But once spring time came,everybody came out of their houses.Gracie loves having picnics in the cathedral gardens or on the beach.Chichester Cathedral is the only medieval building in Britain that has a free-standing bell tower and a still operational almshouse-hospital.

During the first part of Garcie's "gap" year off before university,she spent some time in South America,for three months with a host family.It was an exchange/volunteering program and she was among a group of 16 Bristish people who helped to teach English and build part of a nursery school.She says the thing that surprised her the most about being there was the huge gap between the poor and rich.She says that in Lima,Peru,the area was very built up and looked just like every other city where people live,but only one hour away from there,were people living in shanty towns and slums.Many people have no access to running water and their homes are made of wood.The school they were building had no regulations,so they mixed cement by hand and used nails to hold up the ceilings.She said that at first it was a big shock to see the people love like that,but she actually got used to it because even though the people were so poor,they were amazingly very happy people since they all lived together and shared the same problems/concerns.She said the shanty towns popped up in the 1980's and 1990's because the people were fleeing from terrorism.She said that she had a great time with her wonderful host family and recently learned that her host family had another baby,so she feels like she has another "host sibling".She says that this opportunity has made her realize that maybe we'd all be happier if we tried to be more of a community,rather than living in such a materialistic,money driven society.I couldn't agree more,we have definitely left behind the days when you would borrow things from your neighbors and ask them for help building your house,etc.We really love such sheltered lives these days and don't communicate with our neighbors as people did in the old days.It would be so nice to go back to those old days.I know where we lived in Michigan,they were trying to build more community friendly neighborhoods to bring back that feeling and in the center was a park for the kids.It was a really good idea,but I don't think it worked,people are too involved with their jobs and their own personal lives.I really love how people are trying hard to bring communities together with community kitchens and gardens.Hopefully these ideas will spread farther and become more popular.Gracie says she really misses the shanty town dearly and hopes to return.I think maybe we all should try helping volunteer to help those less fortunate so they we can really have the feeling of how truly blessed we are to have what we have,because at least in the states,we can get some help (food stamps,etc) that people in poor countries cannot even imagine getting.

Thanks Gracie for your lovely letter and all the brochures,ticket stubs (we love ticket stubs),pictures (one of Lima,Peru and then the other shows the complete opposite,the shanty town and also one picture of the school they were building) and postcards!They can all be seen below: 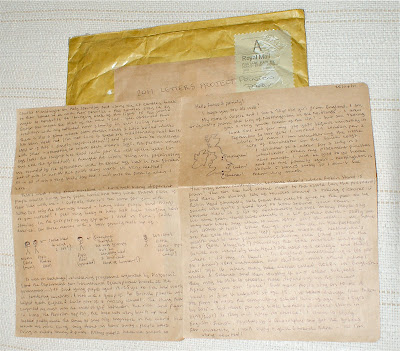 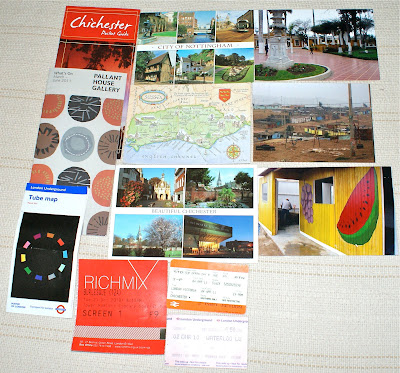