Letter #175 comes from Emilie in Massachusetts.Emilie is currently studying French at college and is working towards her masters degree.She says it's a lot of hard work,but it's fun,too.She gets to teach two classes of elementary French at her college,which must be really exciting and hard work at the same time.

She says that she can't wait for summer vacation so that she will have more free time to explore Boston since she is not originally from there.She told us that the Public Gardens there are really beautiful.We love nature,so we would love to see the gardens there.It was also the setting for a children's book called "Make Way for Ducklings".When she moved to Boston,she was really excited to see the statue of the baby ducklings following their mother.She also told us that Boston has the best ice cream.She has tried some unique flavors,with black raspberry and blueberry cheesecake being her favorites.

Emilie grew up in Maryland,only 15 minutes from the Virginia border.She lived 40 minutes away from the Del Marva peninsula,where the famous Chincoteague ponies are from and she still loves to read the books by Marguerite Henry about the Chincoteague ponies.I believe my daughter used to read those books when she was younger and was going through her "pony" phase.Emilie used to have her own pony named Windsong,so that is why she is so fond of horses,but,unfortunately,she died three years ago.She said that her dad had bought a mule to keep her horse company since horses are herd animals and need companions to be happy.She said that mules are a hybrid of two species,they have a horse mother and a donkey father.She says they are very sweet and extremely intelligent animals.They look like horses,but have bigger ears.She said that they love to have the insides of their ears rubbed,but once you take your finger out,it's all covered with ear wax....hopefully you weren't eating when you read that part. ;)

She really misses home a lot since she lived in the country,where it was so green in the woods.She still dreams about home and misses the log cabin she grew up in.Even though Boston in her new home,she is still a country girl at heart. :)

Thanks Emilie for your very sweet letter,we hope you have continued success on your goal to get your masters degree!You can see her lovely letter below: 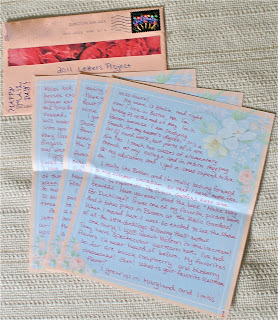