Letter #176 from The Netherlands

Letter #176 comes from Roxanne (or as her friends call her Roxxy) in The Netherlands.She was born in Utrecht and is currently a student.She describes herself as both a book worm and a music junkie.She loves books and carries her ipod around everywhere.She also is a writer and singer.She has been taking singing classes since 2009 and still wants to learn more.She also enjoys watching soccer,shopping,hanging out with friends,dancing,watching tv,swimming,travelling,postcrossing,and much more!

Roxanne says she is not a very picky eater,but does not like olives and a few herbs,other than that,she is pretty open to a variety of foods.She loves rice,pasta,risotto rice and chicken the most because you can always change the flavors and make a different kind of meal using just those ingredients.

She also said that spring has been really nice so far this year.It has been much warmer compared to previous years.She loves the warm weather since she can go swimming at the lake and have picnics at the park.The sunshine makes her so happy and gives her energy.

Roxanne is attending university for Communication Management.She says that at one point,she wasn't even sure what she wanted to do,so she took a break for two years until she realized that she could do what she really wanted,after all.She says she would love to be a singer,but not a famous one (hmm,maybe she could be like Milli Vanilli,if anybody remembers them....they turned out to be lip syncing...ok,just joking,but I guess if you really wanted your voice to be heard,but not be seen,it could be an option). :) Anyways,back to the letter,she thinks it would be really nice to work with musicians and since she's very skilled in organizing,she's thinking she may be a perfect fit for being an event manager.She also has a passion for creative writing and would like to be a freelance writer.....maybe she could write about the music events she plans. :) She really would be happy to have a job that consists of her three loves- music,organizing and writing.The only job she doesn't want is one where she has to sit at a desk in an office.

She is currently working at an old ship dock as a trainee,where they repair ships that were used for river transport.She says that they currently function as a museum but that they still have the ability to repair ships that are over 50 years old.She also says that there is a small harbor with many historical ships and that it's reallt beautiful,with a rich history.Her current job involves public relations,communications and advertising.She has really learned a lot through this internship.

She said that the city she was born and lives in (Utrecht),is a big city and that there is always something to see and do and she loves that she can go shopping every day.She doesn't like silence,so she doesn't think she could survive living in a small town.

She also shared a couple of facts about her country that we may not have learned about from previous letters.The Netherlands is a constituent country of the Kingdom of the Netherlands.It is a parliamentary democratic constitutional monarchy.The capital is Amsterdam and the seat of government is The Hague.As of January 2010,the Netherlands had 16,574,989 inhabitants.The Netherlands is often referred to as Holland,although North and South Holland are actually only two of its twelve provinces.The word "dutch" is used to refer to the people,the language,and anything pertaining to the Netherlands.Geographically,the Netherlands is a low-lying country,with about 25% of its area and 21% of its population located below sea level.Most of the country is very flat,with the exception of foothills in the far southeast and several low-hill ranges in the central part.

When she wrote us the letter,it was a special day in the Netherlands,they were celebrating Queens Day (April 30).Their former queen was born on April 30 so it became a national holiday.Every year the royal family visits one of the cities or towns in the country and they show it on tv.They also have flea markets,music everywhere,people can buy drinks and food on the streets and almost everyone is dressed in orange.Since most people really love to party,they have invented Queens Night,which starts on the 29th of April.So,for about 24 hours,there is orange madness going on in the country.She says that the color orange is not on their national flag,but it is part of the last name of their queen,therefore,orange is their national color.So you will usually see people wearing orange during sporting events or national holidays to show that they are Dutch.

She also told us about some other holidays.On May 4 (which happens to be my favorite day b/c it's my birthday) it's a sad day where they remember the casualties of World War II.But then the next day,on May 5th,there's Liberation Day,which is Roxanne's favorite holiday.All around the country,people organize big events and festivals with music and much more.You can sit in the park with friends and listen to the bands play on the stage.She said that the best part is that there's free admission. :)

Along with her lovely letter,Roxanne included some printouts with pictures of herself,her boyfriend,the place she currently works at,her family,boyfriend,their pets and of course,a map showing her country and city.She also enclosed some postcards,some mini flags,and a Dutch wooden shoe keychain.Thanks so much Roxanne for the letter and goodies,which can be seen below: 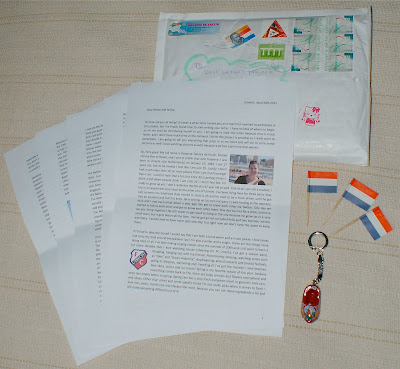 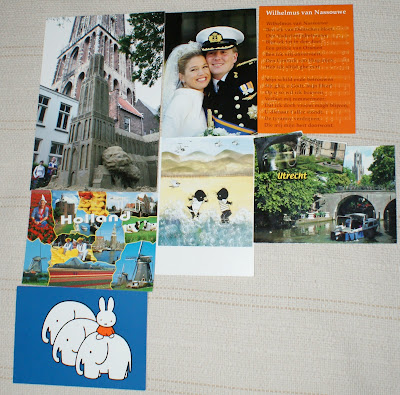 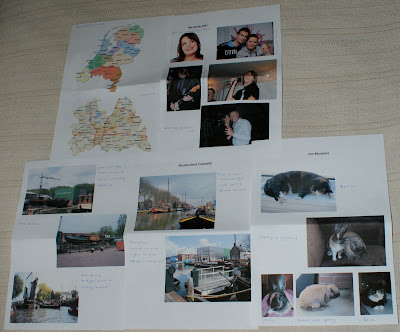