Letter #204 comes from Marguerite in Pennsylvania.She is a stay-at-home mom to three lovely daughters.Both her husband and herself were born and raised in the same city and both of their parents still live there.She is so glad that her children have the opportunity to see their grandparents so often.They live in a small city,but their arts scence continues to grow.

Marguerite studied Art History at Rosemont College near Philadelphia.She previously worked at the Pennsylvania Museum Commission during the summers of her college years.She also worked at local museum sites,including Landi Valley and Ephrate Cloister.Although she isn't interested in facts and dates,she does love artifacts from everyday life,espcially epherma like letters,books,journals,and advertisements.In her spare time,she also enjoys creating her own works on paper.Who knows,maybe her works of art could one day be in a museum for future generations to examine. :)

She also told us that during the American Revolution,Lancaster was briefly the capital of the colonies on Sept. 27,1777, when the Continental Congress fled Philadelphia.In 1812,the capital then moved to Harrisburg.

She has written her letter to us in parts on the back of the postcards,so I will go over each letter from each postcard.

James Buchanan,who was the only president from Pennsylvania was the only bachelor president,so his niece,Harriet Lane served as his First Lady.

Franklin and Marshall College is one of the oldest institutions of higher learning in the U.S.Franklin College was founded in 1787 with a generous financial gift from Benjamin Franklin.Marshall College,named after Supreme Court Justice John Marshall, was founded in 1836 in Mercersburg,PA.It moved to Lancaster in 1853 and merged with Franklin College.James Buchanan,the 15th president,was the first President of the Board of Trustees of the newly formed Franklin and Marshall College.It hosts many academic and cultural events that are open to the public.

She also couldn't resist sending us a postcard with three Amish girls since we both have three daughters. :) The Amish are a religious sect from Germany who retain many traditional customs.They make their living almost solely by farming,without the use of any modern conveniences like electricity and gas engines.They also don't drive cars or have computers.They are widely settled in Eastern Pennsylvania and still speak a German dialect,often referred to as Pennsylvania Dutch.The Amish are also known for their detailed quilts and heirloom furniture.There are many Amish and Mennonite farms in Lancaster County.Marguerite enjoys their fresh produce and admires their discipline and hard work,as well as the strong sense of community that they have.

Thanks Marguerite for your lovely letter,postcards and map of Lancaster County,which can be seen below: 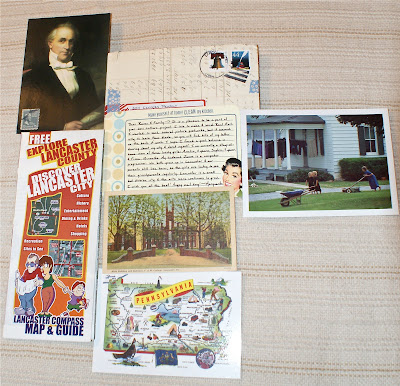