Letter #196 comes from Barbie in New Jersey.She says she has become obssessed with mail since she left for college.She recalls spending many hours in high school texting friends,but now enjoys writing letters.Maybe if more people can start writing again,we won't have the problems with the postal service and they can stick around for a lot longer.

Currently,Barbie's job is finding a job. :) She has spent numerous hours dropping off resumes in and around Manhattan and even had to take some time off for her blisters to get a break.Hopefully her feet are feeling happier now. :) Barbie has recently moved to Jersey City.She is hoping to find two jobs so that she can afford a place in Manhattan or Brooklyn....I hope she is able to afford more than a closet since I hear it's quite expensive to live there.She says she would love a job in a book store or at a quilting shop since that is what she has experience in.Maybe someone reading this can help her out.

Barbie has worked in libraries all through her high school and college years.She has learned to mend books and also learned different ways to bind a book.I would love to learn to bind books,too, so that we can make our own books for us to enjoy as a family.

She used to live in Richmond and misses it,but she also loves the urban environment and the fact that she can go to Manhattan without a car.I think I would love to be able to live in a place where I didn't need a car,although I think I would sometimes miss the privacy of my car if I've been out all day and just want to throw all my bags in the trunk.She has survived all this time without a drivers license and doesn't plan to get one since she doesn't really see the need for one now.While she lived in Richmond,Virginia,she would ride her bicycle to her job.She prefers to walk instead of taking a bus,when possible.

Some of her interests include Star Trek,Harry Potter,Lord of the Rings,Star Wars and Doctor Who.She was even on a quidditch team while in college.Her position was chaser.I definitely didn't even know that there were real quidditch teams.She hopes to get in touch with the team in New York so she can play with them since she really enjoys it.

Her other love is vintage clothing and she tries to wear vintage dresses whenever going out.She also enjoys making her own clothes,too.She is also contemplating making crafts to sell on etsy since she usually makes handmade gifts for others.

Barbie also loves to cook,maybe that is because her father is a chef.Her sister is currently enrolled in a culinary program (that's one of the things on my bucket list is to learn to cook).She says that her father tried hard to keep them out of the food service industry,but it seems like it backfired since her and her sister both love cooking.Barbie's favorite food is fried rice.She also shared a cooking tip with us,she says that she likes to add sauted carrots to her tacos...it tastes fabulous, she says.Some of her other favorite foods include sweet potato fries,waffles,sushi, Mexican and Indian food.Her favorite cookbooks are Moosewood and Betty Feezov's cookbook.

She has also been reading various books,including the Little House books and a book called American Gods by Neil Gaiman,which she says is truly amazing.

Thanks Barbie for your lovely letter and New York postcard,which can be seen below: 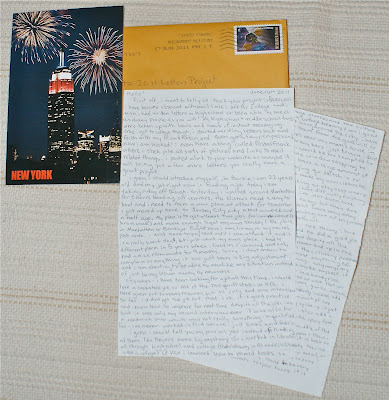