Letter #195 comes from Meinhild in France.Her lovely letter was written on postcards (she wrote on paper that she attached to the postcards to make them like a little booklet).She lives in Lyon,which is where she also works.She works in a small publishing house,which seems like it could be an interesting job.She says that if we were to visit Lyon,she would take us to see the old part of Lyon to see places like the catholic Basilica.Then we would go a famous place called Bellecours.Our next stop would be a walk up the Rue de la Republique,where there are many stores to discover,along with many old buildings.From there,we would go to Place des Terreaux to take a break and sit at a cafe or enjoy ice cream.Place des Terreaux is famous for a monument which was done by the French designer Frédéric Bartholdi,who is also known for creating the Statue of Liberty,which we just recently read about.

She also says that Lyon is home to many museums.She would like to take us to meet Gnafron and Guignol,which are puppets.I think that would be really cute to see.Our next stop would be the Miniature Museum or the Museum of the History of the Movie Theaters.

She also told us that the author of the book,"The Little Prince", Antoine de Saint Exupéry,was born in Lyon.In 2000,the Lyon Aeroport was named after him,which is the airport we would arrive at if we were to visit her.

That was such a fun trip through Lyon and I want to thank her for her lovely letter and lovely postcards,which can be seen below: 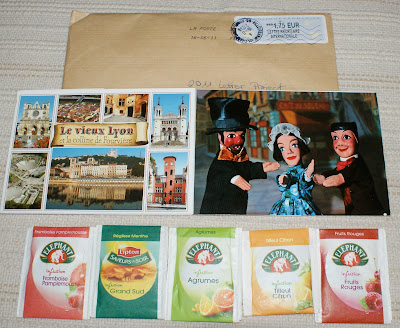 Email ThisBlogThis!Share to TwitterShare to FacebookShare to Pinterest
Labels: france