Letter #197 comes from Judy in our home state of Louisiana.I believe she wrote this letter with a fountain pen... isn't her penmanship amazing!? This is our very first letter from Louisiana.Judy lives in southeastern Louisiana in Iberville Parish.For those of you not from Louisiana,a parish is what other states call counties,it's the only state that doesn't call them counties.It was pretty had for me to get used to counties when we moved out of state.

She says she has a sugar cane field next to her house.I can remember when it was sugar cane season because the roads would have those occasional canes that flew out the trucks and landed on the road.I never even tried sugar cane till we moved to Michigan,but it must have not been a good one because I didn't think it tasted so good.She says that the sugar cane is ready to cut around September or October,where they will be sent to the sugar mills to be turned into raw brown sugar.My youngest daughter and I had recently read a book about the history of sugar and the work slaves had to do to make the sugar was very hard work because you needed so many stalks or canes to get a decent amount of sugar.It was such hard work,especially before they made machines.We even read that in the old days,people believed sugar could cure a lot of things and royalty would give the world just to get sugar since it was hard to get.

She also told us about the many chemical plants there,which are mostly found along the Mississippi River.... the idea of chemical plants near water scares me since the water could easily become polluted.Big ships come up the river from the Gulf of Mexico and dock at the chemical plants,so it seems that they were built there as a matter of convenience.They transport the chemicals to wherever they are needed all over the world.The chemicals are used to make many of the things we use on a daily basis,such as vinyl,plastics,fabrics,and much more.

Judy and her husband are both retired and live on a small hobby farm.They have three horses and a house cat.She says that the horses have personalities just like people and they enjoy spending time with them.

During the summer the weather gets very hot,starting in April or May.The one thing that I will never forget about Louisiana is the heat and humidity.... who could forget it?Oh and love bugs that   get stuck all in the front grill of your car... not a pretty sight. :) I haven't seen lovebugs here in Virginia,so maybe they are native to LA only.Anyways,in summer they do all the barn chores early in the morning and late in the evening,while they spend the middle part of the day inside with the air conditioner on.Who can blame them. :)

She also mentions about how we always think about how computer technology has changed our lives,but we don't always think about how air conditioning has changed our lives.I think most people will tell you they only think of that when the electricity goes off.I can remember when we would get hurricanes as a kid and we'd lose electricty and it would be so humid,you couldn't even sleep at night.That was when we would talk about how thankful we should be to have air conditioning because it was brutal.Judy recalls the pre-air conditining days and talked about how most people had a lot of mold and mildew in their houses because of the humidity.You would also have a lot of dust in your house from all the open windows.Most people had to spend a lot of time dusting and the walls of your house would have to be painted often.But then she goes on to tell us about the positive side of not having air conditioning.She says that when fathers would come home from work,families would sit on the porch out in the yard because it was cooler outside than in the house.Neighbors would visit each other everyday and would talk to each other over the fences.There was a real community spirit that has been gone since the invention of the air conditioner.

I know that before we left Michigan,they had tried to build houses with a real community spirit by building the houses closer together (sacrificing a yard and privacy) with porches,hoping to bring that old community spirit of neighbors going on their front porch and talking to each other everyday,but it didn't work.With all the technology,people still prefer to stay to themselves,but at least they tried,but it just goes to show you,you just can't bring back old ways.I may not be that old (I am not meaning that Judy is old,so hopefully it is not take that way,just saying I was born after the a/c), but I miss the days where neighbors would borrow eggs and stuff from each other and just helped each other out.I have tried to be neighborly to my neighbor since our driveways are close together so we always have to see each other,but she just hides when she sees us...ok,she's too old to run,but she walks really fast and since she has a garage with windows facing our driveway,she'll peek out the window to see if we are out before she leaves her garage.It is quite amusing sometimes,but mostly I find it quite offensive since she was nice to me when I shoveled snow off her driveway,but after that,she seems to think I have some disease or something.Oh well. :) Judy does say that she wouldn't want to go back to those pre-air conditioning days because,like most people,she likes to be comfortable.I can agree with her there since the south can get so hot.But, like she said,most neighbors don't even know each other,you might wave while passing in a car,but you probably don't even know their names.It's amazing how much technology can change society.

Thanks Judy for your lovely letter,brochures and  postcards (the white one she made with her own photos from Baton Rouge,showing Columbus on the top,St. James Episcopal in the middle and the Botannical Gardens at the bottom),which can be seen below.Her brochures made me miss seeing the old plantation houses we used to pass by when visiting relatives.If you have never been to Louisiana,it's rich in history,but try to visit when it's cooler so you don't pass out from the heat. ;) If you do go,you have to eat boudin (it was my fave food) and my husband would recommend you try the seafood etoufee.It's pretty sad to admit this since I am a Cajun,I have never tried crawfish,so don't ask me how it tastes...I just don't like the creatures. :) Thanks again Judy and look below for pictures: 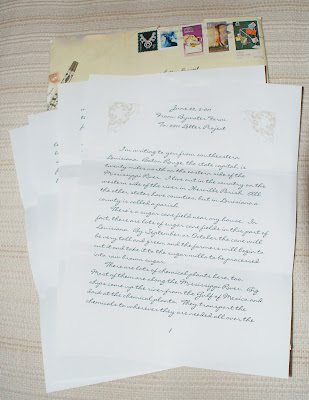 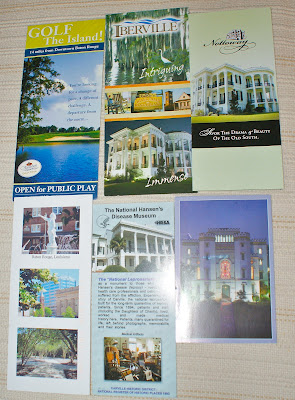 Email ThisBlogThis!Share to TwitterShare to FacebookShare to Pinterest
Labels: louisiana