Letter #198 comes from Iina (pronounced ena) from Finland,home to the fabulous cartoon,The Moomins,which is one of our fave foreign cartoons!Iina loves history so she starts her letter off by telling us about the history of her country.The location of her country has had a real impact on the history of her country.Until 1809,they were part of Sweden,but after Sweden lost a war against Russia,Finland became an autonomous Grand Duchy within Imperial Russia.In 1906, Finland was the first European country to give women the right to vote.Finlamd became independent on December 6,1917 after things changed in Russia,such as WWI and the Febuary and October Revolutions.The first half of the 20th century was filled with wars in Finland.There was a Civil War in 1918,which left the nation badly scarred and clearly divided.During WWII decades later,Finland fought in three wars.Their first war was the Winter War (1939-1940) against the Soviet Union,which she says had a major role in uniting the country.That war was then follwed by the Continuation War from 1941-1944,which was also against the Soviet Union.Finland was the underdog and the main goal was to remain independent.In the Continuation War,Finland got help from the Nazis,but after an armistice was reached with the Soviets,Finland was forced to begin its third war,known as Lapland War,which lasted from 1944-1945,which was a war to get the Nazis out.Wow,that is some history for a country I always think of as quiet since you never hear about Finland in the news,so it's amazing to hear that this country had such a rough start.

Finland is also home to some very talented composers and painters who were in the middle of some key points of the country's history.Akseli-Kallela painted many scenes from their national epic Kalevala (which she says is a very interesting book,which at times can be very difficult,but it's a big part of Finnish culture).He is also impossible to ignore when speaking of Finnish Romantic Nationalism.He is their most internationally known painter.

In music,the most internationally known Finn would be the composer Jean Sibelius.His music had an important role in the formation of the Finnish national identity.His most important composition was called Finlandia,which was written as a protest against the quickly increasing censorship from the Russian Empire.Sibelius was also inspired by Kalevala.Sibelius' home,Ainola (which mean Aino's land and was named after his wife Aino) is a popular tourist attraction,which is located on the shores of Lake Tuusula,which is where many artists lived in the early 1900's.

Now on to some facts about Iina.She has mentioned how her name is very hard for foreigners to pronounce since her name starts with two i's,but as I showed earlier,it's pronounced like e-na,which is actually so easy,buy the i's throw us off.She says it's a popular name for her age group.Anyways,she's a rather typical 18 year old girl.In August,she will be a high school Senior,so she will be very busy with school and having many exams.After reading about school life in other countries,we sure have it easy in the U.S.Seniors here have it made,it's actually the easiest year and filled with more fun things and not really many tests.Iina wants to study English at the university and she will be applying to both Finnish and Scottish universities.Anyways,Iina was born during a recession,which was one of the history's worst economic crises and even worse than the one in the 1930's.Two years later her family moved to Heinola and they have lived there ever since.A few months before that,she says that Finland had won the ice hockey world championships for the very first time....  this recent win made it their 2nd world championship.Finland is a true ice hockey country,but Iina doesn't really understand ice hockey,but she does know that it means a lot to her country.My oldest daughter and I enjoy hockey and think it's so fun to play,well,floor hockey since we don't skate. :) Our fave team would be the Redwings since we moved from Michigan,where hockey is big.

Iina's hometown of Heinola is a relatively small countryside with about 20,000 people,in the south of Finland.Heinola is a summer town and life there isn't very lively after the summer season ends.She says she is quite lucky that their capital,Helsinki is nearby,just 1km south.Heinola is known for the Sauna World Championships,which is just a contest about who can sit in a sauna the longest.Saunas are a big part of Finnish culture.She said that in the old days,women gave birth in saunas.She says that in the championships,they steadily increase the temperature to see who can take the heat the longest.Unfortunately,last year a man died in the finals and another one was badly burnt because they stayed too long in the sauna.She really doesn't understand why they do this.... neither do we,it's pretty crazy to risk death for a championship.Aside from that,she says that saunas are pleasant and relazing.I wish we had one when we lived up north,it would be so nice after a long day in the cold.

Heinola is also home to Apulanta,one of Finland's most popular rock bands.The city has also meant a lot to Finnish literature as well.Two members of a literary group in the 1920's,known as Tulenkantajat,were from Heinola and a third studied for her teacher's degree there,too.The word Tulenkantajat means "the fire bearers",which describes their philosophy rather well.They wanted to introduce the very old-fashioned Finland of the 1920's to the lively modern Europe and its literature.Their writings pictured  the "Roaring 20's" really well and introduced "a new feeling of life".A decade later,the group was disbanded due to political conflicts (some members were strictly on the left,others on the opposite),but the young people who started the group and its magazine in their twenties ended up being rather important characters in Finnish cultural history.

Along with Iina's lovely letter,she sent some beautiful postcards,one is a Finnish winter scene and the other is a summer theme,and the last card is a Moomin card of the charcater Little My,which she says was her favorite as a little girl.She also included some cute Moomin stickers and we also loved the Moomin envelope....yes,we are crazy over the Moomins...they are so cute,you must google their cartoons if you have never seen them! :) Thanks Iina for your lovely letter and goodies,we wish you all the best for a great senior year with less stress.We hope you achieve all your goals in life!You can see her letter and goodies below: 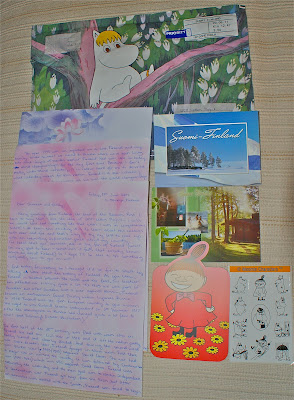