Letter #193 comes from Marina in England.She is in her final year of high school,where she studies English Literature,Theatre,Textiles,and Spanish.She loves school and says that her mother is a Spanish teacher there,so they get to live in a flat at the school.Next year she plans to go to the University of Exter and study Film and Spanish.She is so excited about going to univeristy.

Her family is half English and half Spanish,which is obviously why Spanish is so important for her.She has also lived in Spain and the Czech Republic.Her mother has lived in Texas,Canada,The Philippines and France.Marina feels so blessed to have been able to experience different people and cultures.

Marina has a variety of hobbies that she enjoys,including postcrossing where she trades postcards,twice a week she enjoys Zumba dancing with her mom...I think they talked about that on The Biggest Loser. :) She is also a member of her school's drama club and at the time she wrote the letter,they were preparing for their production of "Grease".I hope it went well.I loved seeing that play when I was a kid and we went on field trips to see plays.I think it's one show people never get bored of seeing....it just seems like it resonates with every generation.

Marina's favorite tv show is "Gilmore Girls" and a debate show called "The Big Question"...I will have to look that one up on youtube to see if we can watch it.As for movies,she watches a lot of movies as a film student,including alternative,indie and blockbuster movies,but she simply cannot pick a favorite.As for animated movies,she did say that her fave was "Up".I agree,I loved that movie,too,I thought it was so sweet.

In terms of collections,Marina likes to collect pez dispensers.I know I had many as a kid.She also collected badges as a kid and even included one in our letter from a tourist attraction called "The Millenium Dome".It was once a huge interactive museum,but is now a huge concert hall and exhibition center.

Travel wise,she has been to many places,including Morrocco and China.She went to China in 2008 for the Beijing Olympics and said it was breathtaking.She walked along the Great Wall and even watched a basketball game between China and Spain...she was happy to report that Spain won. :) She said there were thousands of spectators and she got her face painted with a spanish flag on it.She was also was fortunate to visit the traditional Hu-tongs and the Forbidden City.The food was divine and she felt it was a hundred times better than any take away food in England,in her opinion.

In addition to her letter,Marina included some coins and a postcard from an art exhibition she attended last year.It seems like Marina is very fortunate to have been able to travel and learn about other places at such a young age.I hope that as she gets older,she is able to continue to travel and explore many more places.Thanks Marina for your lovely letter (we love Diddle),postcard,badge and coins,which can be seen below: 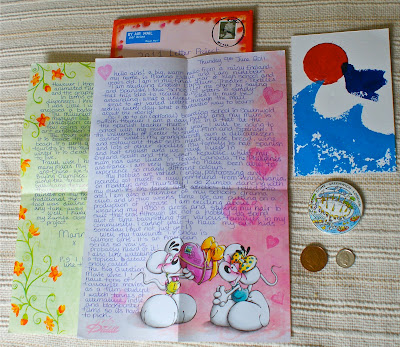