Letter #188 comes from Elina in Finland.She says that her name is quite common for women of her generation.She says that she was born during the decade of big changes.In the mid 1960's-'70's,many Finns moved from the countryside to the cities ans some even emigrated to Sweden.

She says that the city she lives in,Vantaa is a big city (by Finnish standards) and is a part of the capital area.She also says that both herself and her husband were born in Helsinki and have both lived in the capital area all their lives.

Elina loves nature,animals,reading,movies,cooking,and crafts.She says that crafts,knitting,cooking,baking,gardening, and home decorating are currently very popular in Finland.She also says that traditional Finnish cooking is becoming a rising trend,but that's ok with her and her husband since they have always eaten traditional foods since that is what their parents cooked for them as kids.There's also a huge difference in culture between the West and East and these lines have existed since the 14th century,possibly even longer.The capital area,though, is a melting pot with over one million inhabitants.

Elina has also added pictures to her letter,the top picture showing a lake close to her house and the bottom picture showing Turku Archipelago at sea from the deck of a cruise ship.She has also included some wonderful postcards.The first postcard is from Hakaniemi,a part of the lower working class side of the city in the old days.She says the unions still have their headquarters there surrounding the market square.The Hakaniemi Market Hall is a popular shopping place for both locals and immigrants.In the second postcard is a view of a popular sea fortress,which is also a recreational area for the locals.Elina  says that it is one of her favorite places in Helsinki and that she went there as a child for art summer camp.In the third postcard is Helsinki City Centre and the Lutheran Cathedral.In the old days,this was the upper class side of the city.She also noted that Helsinki (and Finland) got their first McDonald's around 1985 and that the modern cafe culture only came during the turn of the millenium.She says there are many nice cafes,both chains and individual ones,but no Starbucks,though,which seems to be a disappointment to her.

Thanks Elina for your lovely letter and postcards,which can be seen below: 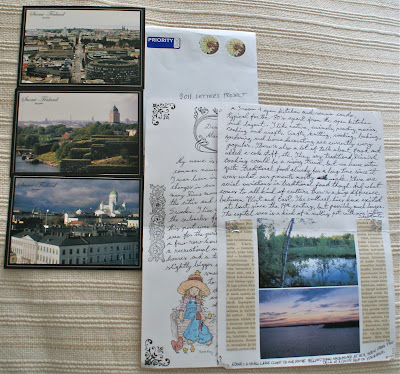