Letter #185 comes from Cassandra in Colorado.As she says in her letter,Colorado is mostly known for their mountains and some of the best ski resorts in the country.Even though she doesn't ski much,she says there is still plenty of other things to do to keep one busy,such as hiking,boating,fishing,hunting,camping, and white water rafting.I've always wanted to try white water rafting as it looks so fun,but it may not be wise for me to try it since I don't know how to swim,but it still looks so fun! :)

Casssandra lives in the state capital,Denver and actually used to live very close to the capitol building.She said it was very nice to live downtown because you could walk to so many different places.She also said that the Denver Public Library is so huge that it covers an entire city block and is three stories high.Now that is my kind of library!My daughters and I love nice libraries where you can find many books and sit down and relax.

If you ever plan to visit the area,she recommends you make a stop at 16th street,which is lined with everything from restaurants to a movie theater with 16 screens.And of course,you will have to stop at the 16th Street Mall,which is a big tourist attraction.There are also many talented people that perform on the streets and if you get to tired to walk,that's ok,just take the free (yes,she said free!) mall ride,which is a shuttle that goes up and down the dozen block length of the mall,or if you are really in for a treat,take a horse-drawn carriage ride.

Cassandra has lived in Colorado most of her life and loves it because there is never a shortage of things to do,especially in Denver.In Denver, you can find Six Flags,Lakewood Water World and Pirates Cove,which is geared more towards kids.

She has also shared some interesting history with us.She says that in Denver thereis a museum called The Molly Brown House,which is named after a real person named Molly Brown,which was also known as "Unsinkable" Molly Brown because as a baby, in the 1800's,she was found floating down a river in a basket and was raised by a kind family.She grew up to marry a man named John Brown,who later became well known for being one of the first men to find gold in Colorado.They became wealthy and built a huge house in Denver,which still stands today.She was also aboard the Titanic and survived...so this amazing woman survived two potentially deadly encounters in water.She was also known to be quite a loud and obnoxious woman who didn't really fit in with the upper society of the area.Cassandra said that there is even a movie about her....we will have to look into that for sure because it seems like an interesting story.

Thanks Cassandra for your lovely letter,which can be seen below: 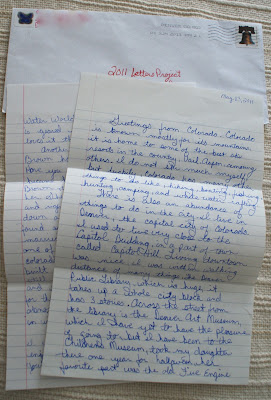 Email ThisBlogThis!Share to TwitterShare to FacebookShare to Pinterest
Labels: colorado