Letter #187 comes from Katerina from Greece.Katerina lives in a city called Thessalniki,which means "Victory over Tessaly" from ancient times.If you noticed the "Niki" ending,it is better known to us as Nike....we recently learned that the brand Nike came from the Greek word niki and thought that was interesting.I know there are many things things that we use daily that come from Greece,such as the days of the week....you can google it to find out what they mean,I think it's quite interesting. :)

She has also sent us some wonderful postcards and explained their pictures to us.On the one of her city is the "Old White Tower" and a statue of Alexander the Great,who came from Pella,a town nearby.

On the second card is their capital,Athens,which shows a soldier from the Greek National Guard wearing traditional clothing....yes,he is wearing a skirt,which she compares to the Scottish kilt.You can also see the Acroplis on the card,along with with the Parthenon Temple.

Katerina wrote our letter while she was on summer holiday.She says it is too hot to stay in the city (it has been very hot here,as well) ,so she likes to go seaside.She also says that she is a retired art teacher but still loves to create art and send it all around the world.She also has a son that is artistic....he specializes in photography,so they both keep pretty busy creating art....it must be genetic. :)

Thanks Katerina for your lovely letter and beautiful postcards,which can be seen below: 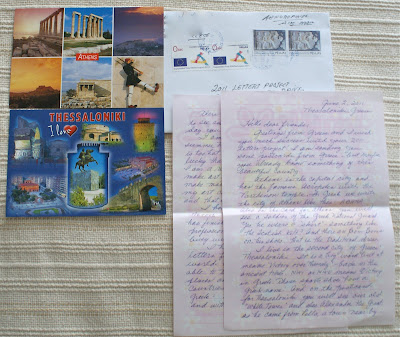 Email ThisBlogThis!Share to TwitterShare to FacebookShare to Pinterest
Labels: greece