Letter #191 comes from Rhonda in Florida.Rhonda was born in Covington,Kentucky, but has lived in Florida since 1981.Her father was in the Marine Corps,so that's what led her family to move to Florida.She has a sister that is a forensic scientist with the FBI.Rhonda works in a nursing home as a nurse's aide.She says that it's a very hard job but she really loves her patients so it's worth it.She says that when you do something you love,the days go by faster.She also said that she still has no idea what she wants to be when she grows up,even though she's in her 30's....it seems like we had so many letters saying the same thing,maybe it's just that we don't have enough confidence in ourselves to just go for what we want since we feel that we have to be realistic and just take any job so we can pay the rent,etc.That's just one of my theories,I could be wrong. :)

Rhonda is a mother to two wonderful children,a son and a daughter.She also says that she loves where she lives because she is close to Disney,so she was able to bring her children to explore such a magical place with them.As she says,most kids never get to experience Disney,so her kids are quite fortunate.

She also mentioned that the part of Florida she lives in isn't like what you see on tv or in the movies.The beaches there are not filled with clear,blue water and white sand.They also have more pine trees than palm trees.The town she lives in is a very large military town.

She also told us that she is a huge fan of history,early American History,to be specific and would love to visit our state since it is rich in history.We live in the southwestern part of the state,but hope to explore out east and see all the historical places that our state has.Also,if you ever come to our state,you must see the Blue Ridge Parkway,we haven't been on it yet,but have seen pictures and it's a beautiful drive that one must take when in Virginia!

Thanks Rhonda for your lovely letter,which can be seen below: 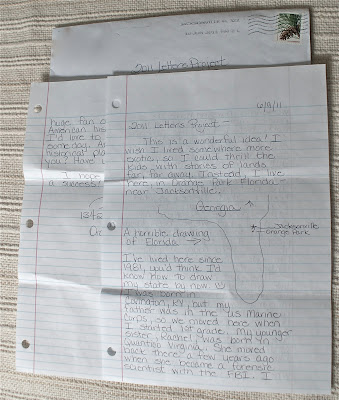