Letter #186 comes from Gail in California.She sent us a short,but sweet letter telling us about her hometown of Oakland.She says that she thinks/knows it is one of the best places in the world and that it often gets  bad press,when there is more to the city than what you hear on tv.She says that the crime is in a small area and that their mayor is addressing the problems to make it a better place for families to live.

The city is very bike friendly and Gail has been without a car for three years now due to this.Can you imagine the money she saves on gas?She also says that the weather is wonderful!While they do not have distinct seasons,if you are in the mood for a particular "season",you can drive a few short hours to see snow,the desert or take a 30 minute drive to the ocean.It is really sad when areas are portrayed as bad places when they have small pockets of crime as do many places,you just have to know which areas to avoid.I'm sure Oakland must be very beautiful....has anybody known the landscape of California to be anything but breathtaking?

Thanks Gail so much for your letter and Oakland stickers.It can be seen below: 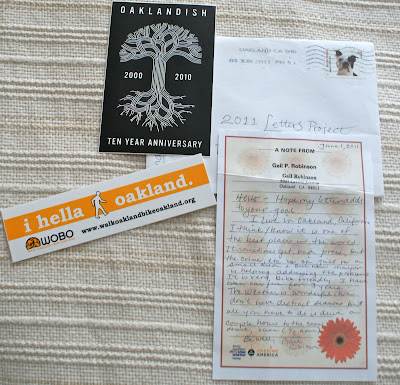