Letter #260 comes from Susan in Canada.She lives in North Vancouver with her daughter (her letter will be posted next),son and her husband.Susan works from home as an editor,researcher and writer.They have three cats named Little Bit,Jamie (also known as Mr. Trouble) and Dottie.

In her spare time she enjoys all kinds of crafts,reading,walking,gardening and spending time with her family.She also said that she likes to do anything with mail...who doesn't?

She told us that North Vancouver is just across the Lions Gate Bridge from Vancouver,on the North Shore Mountains.They live 680 feet up one of the mountains,so steep hills are a part of their everyday lives....steep hills really scare me and I don't know how they deal with snow on the mountains...scary!They have a forest in their backyard and get a variety of wildlife visiting quite often,with the most offensive visitor being the skunks,then there are raccoons,coyotes and even black bears!She says that they don't live in the country,yet there was a cougar in their neighborhood.From her deck,she can watch a bear roll around on the lawn and also see the view of massive skyscrapers downtown.When her kids were in school,the teachers had to check out the playgrounds to make sure there weren't bears out to attack the kids.I don't think I would ever play outside if I thought there were bears.

Vancouver is a beautiful city and she says you can literally go sailing and skiing on the same day!There are forests,beaches,farmlands and all the things that come with a big,multicultural city.But it's also a rainy city,and not very snowy where people live.She says that they don't get as much snow as the rest of Canada does,so that's a good thing.

Susan is originally from the San Francisco area and says that life in Canada is very similar to life in the states.She says they get books,tv and music from the US and Britain,so they get a variety of choice.She also said that the stereotype that Canadians are very polite is absolutely true!

Thanks Susan for your lovely letter and postcards (we love olympic mascots),which can be seen below: 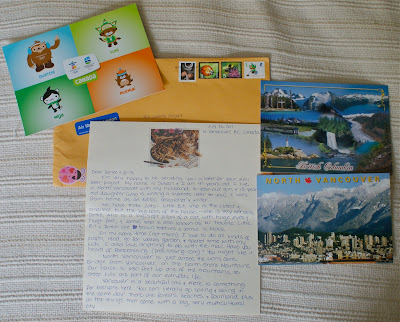