Letter #253 comes from Jennifer in California.Jennifer lives in southern California and works at Disney so she let us know ahead of time that the letter will include a lot about Disney since it is her life. She has been collecting Disney items since she was four years old,so I guess it makes sense that she should have a job there. :) Jennifer is the ultimate Disney fan....how do we know that?Well,she wrote to us on Mickey Mouse stationery using a Mickey pen on top of a Cars lapdesk while wearing Buzz Light Year socks...ok,maybe that was a little too much info,but I told you she was a true fan,right? :) She is even fortunate enough to have an annual pass to Disneyland so she goes often.She says she tries hard to be a grown up,but she loves cartoons and Disney too much.I'd like to know who said adults can't watch cartoons because I still love cartoons,too. :)

Jennifer also enjoys cooking,writing letters,hanging out with friends and family and reading biographies.She also loves to travel and has recently visited the Grand Canyon,which is only a six hour trip from her house.She said that when you stop and look out at the canyon,it looks like a huge painting because it seems to never end.We've never been there but it's on our list of places to visit one day.

She loves where she lives because there are countless places to eat at.Within just 10 minutes of her house,she can get any type of food you can imagine.Her favorites are Japanese and Italian,while her fiancé prefers Mexican food.

Jennifer also gave us a quick run down on how close she is to everything....

Along with the letter,Jen sent us a couple of postcards,which can be seen below.Thanks Jen for the letter and postcards! :) 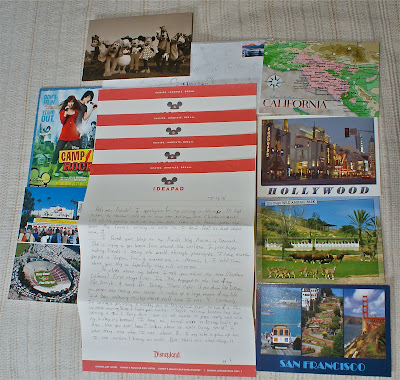