Letter #258 comes from Michelle in Florida.She says she just had a birthday in May...so did I,but we won't reveal our ages. ;) She's been living in Florida the past six years and lived in Illinois previously,in a suburb west (about 30 min) of Chicago.Chicago was one of our fave places to visit when we lived in Michigan,so we went quite a few times,it's a great city,but too much traffic,but you still gotta love it!She used to work at the Art Museum in downtown Chicago and told us about how the workers would eat lunch at the park and the squirrels would come and take food from your hand.She once even fed them a powdered donut...wonder how he liked all that sugar? :) Now she lives in a small town,right across the river from the Vehicle Assembly Building at Kennedy Space Center.She could even see the shuttle and rocket launches from her backyard!That must have been pretty amazing to see and to not even have to leave home...prefect!Unfortunately,we have seen the last space shuttle launch so a lot of people in the area have lost their jobs.Michelle works as a guidance counselor for  a jr./sr. high school in the area and has seen the enrollment go down because of the loss of jobs.

Michelle's town is also near the ocean and is also about a 20 minute drive from Port Canaveral where the Disney Cruise ship and other ships go out to sea.Next to Port Canaveral is Cocoa Beach (reminds me of I Dream of Jeannie),where tourists like to visit.

Unfortunately her town was only busy during the space shuttle launches,people would line the streets along the river to watch the take-offs,like people waiting to see a parade.She also lives 40 minutes east of Walt Disney World,Sea World and Universal Studios.She recently went to Sea World during her summer break.She hoped to sit in the splash zone where Shamu splashes,but there was no room.She enjoys seeing the Florida Manatee and touching the sting rays and dolphins.

She also told us that the area she lives in doesn't usually get hit by hurricanes very often,so that is a good thing.She also says that are further from Orlando,so they don't get as much rain as they do there.

Michelle also has four dogs,two goldfish and one small turtle.She enjoys teen books and fishing.Sometimes at the beach,she catches small sharks,but they always throw them back.Thanks Michelle for your lovely letter,which can be seen below: 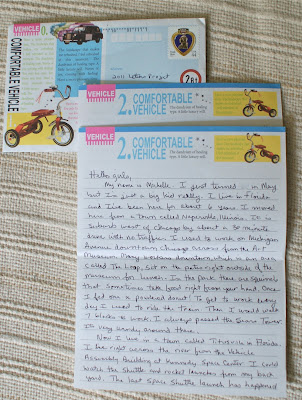