Letter #255 comes from Samantha in California.Samantha says that she will be moving to the east coast soon to start college,where she will be studying journalism.When I was in high school,that was one of the things I wanted to be in the future since I loved writing.She says she also loves to read and do creative things such as crocheting.She loves vintage things and even typed her letter on a vintage typewriter that belonged to her great-grandfather.I think vintage typewriters are so cool,I have a small collection myself,but they need some new ink ribbons,so we haven't been able to use them. :(  Samantha also enjoys swing dancing and the "big band" music that goes with it.She goes dancing at least once a month with her friend and they have a blast!

Samantha is a wonderul mix of Cuban and Italian and grew up speaking Spanish and knows more about the Cuban culture.Her family went to California after the Communist Revolution in Cuba in the 1960' ince it wasn't safe anymore.One of her favorite things about Cuban culture is the food and she is worried about missing her food when she goes to school.Hopefully she won't be too far from any Cuban stores or restaurants so she can have her fave foods such as natilla,a dessert that is similar to creme brulee,which she even gave us the recipe to,so that should be fun to make.

Samantha describes her family as being very big and loud...sounds like a fun family to me. :) She said that on Christmas Eve,the whole family gets together for a big dinner party with traditional Cuban foods like lechon,platanos fritos,frijoles negros and cafe con leche (roasted pork,fried bananas,black beans and coffee with milk).They also enjoy playing their favorite Cuban music,such as Celia Cruz,who enjoyed living life and was very optimistic.

Thanks Samantha for your lovely letter and recipe,which can be seen below.We also want to wish her the best when she starts college. 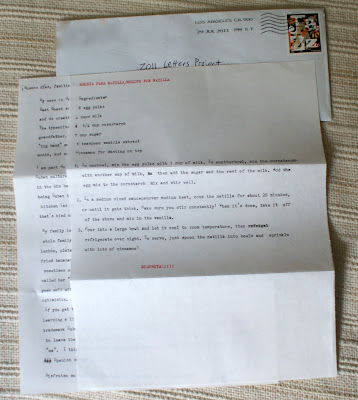