Letter #257 comes from Jemma in Australia.Jemma wrote to us from Queensland on a warm and sunny day,even though it is the middle of winter there.When she wrote the letter,the temperature was 22° C.The part of the country she lives in has a sub-tropical climate,so it never gets really cold there.But, in Victoria,they are probably having their ski season in full swing.She also said that none of the cooler weather ever seems to last as long as in her home country of England.And she also said that she finds the summers in Australia to be really hot since she is used to cooler weather,of course. :) Like she said,it's possible for us as human beings to adapt to most things,we just may never really enjoy it.

Jemma says that before November of 2009,she had spent all her life in Oxford,which is well known for Oxford University,one of the UK's most prestigious and oldest universities.She says that it's not a campus based university like here in the states,but it is formed out of 44 separate colleges.Many of the beautiful old buildings that make up Oxford's skyline belong to the university.But there is a also a lot of history there that doesn't belong to the university,such as the Castle Mound site (the remains are from 1070 AD).Also,there is the Saxon Tower of St. Michael at the North Gate,which is 1,000 years old that is still standing!That must be amazing to see!

She really misses the history from her home city since Australia is a newer country,in terms of being populated widely,so there isn't as much history to the area.She also misses her family and friends,but is thankful for the technology that allows her to keep in touch with them,so she wonders how people years ago coped with only letters from their loved ones and the fact that they may never have seen one another again.

She moved to Australia she could be with her partner who is Australian and in the army there.They do hope to live in Europe some day soon though.She never imagined she would live there as she had always lived close by her family and says that everybody in the family thought she would be the one who would never move so far away....looks like they were all wrong.You just never know where life's adventures will take you.

Jemma studied Geography and Sociology at Oxford Brooks.You need to be an exceptional student to get into the Univeristy of Oxford,so she went to the city's second univeristy.

One of the things Jemma has come to learn moving overseas an starting from scratch is that life doesn't come to you,you have to go and actively find it!With her partner in the army,she has move around a lot.When her partner had to leave her alone for two months,she realized that she could shut herself in her house and miss him terribly or she could push herself out the door and join some local groups to meet people and not feel so lonely.She says that she is not the type of person to just go out and join in,but she took the plunge and found it to be well worth it.She says that how one little thing leads on to lots of other little things,like the snowball effect.She joined the local singing group,which helped her meet wonderful people of all ages and backgrounds.She also got the opportunity to sing at many places.She also helped with the community newsletter,made cards to sell for charity,volunteered at two vineyards,which led her working for three months bottling wine...quite different from her office jobs in England. :) Her advice to anyone moving to a new place is to join some sort of club in your area an if there are none,she says to start  your own.She also says to be willing to try anything (within reason) once and be open to new experiences and have a sense of adventure.

She has recently moved again,this time to a busy suburb,but she says that even though cities have more people,it's always harder to meet new people and that there are less local groups,although she has just found a papercraft group and possibly a choir,so she takes what she learns from her previous home and adapts it to her new home and it has worked for her,so far.I'm glad to see that she is having so much success at finding new friends to keep her busy since it must be so hard to be so far away from loved ones.

Thanks so much Jemma for your lovely letter and beautiful postcard,which can be seen below: 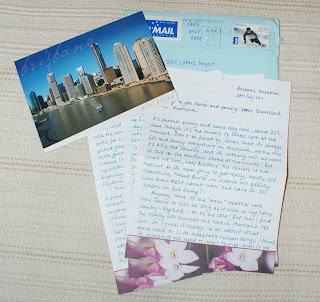