Letter #254 comes from Qinyi in Singapore.This is our first letter from Singapore so it was quite exciting.Qinyi (pronounced Chin-yee) is a Chinese girl born and bred in Singapore.She says that her home country is full of migrants since a lot of their ancestors moved there from the 1800's.Singapore is an island state,meaning that technically they are geographically smaller than Manhattan,NY,but still considered a country.Her country has about four million citizens and other expatriates there.Most of them live in either public or private apartments due to land scarcity.To give us an idea of just how small the country is,she says that if you were to drive 2-3 hours in any direction,you would be out of the country.

There is a diversity of people from different ethnicities and the four major races found there are - Chinese,Indian,Malay, and Eurasians.The national language us Malay,or to be more precise,Behasa Melayu,which is different than the Indonesian Malay that they call Behasa Indonesia.Despite the fact that Malay is the national language,English is the "lingua franca" there and is taught as a first language,due to the fact that they were a British colong until the 1950's.The British educational system is still used in their country to this day.

Qinyi speaks English and Mandarin and can understand a little Malay and Cantonese - a Chinese dialect.She lives only 20 minutes from the city,or main shopping area.She says that you can find food at almost any time of the night.Since the country is so small,many people spend time travelling around the region.She has travelled to China,Malaysia,Indonesia,Thailand,and Hong Kong.She also lived in Brisbane,Australia for just over two years,where she studied art history at the college there.

Qinyi currently works as a curator at a university art museum and her job consists of researching about art and also to conceptualize and put up art exhibitions.It is a very challenging job,with little pay,but is something she enjoys doing.She also enjoys writing letters since it is much more intimate than an email....I couldn't agree more.I definitely think you can learn a lot about people from a handwritten letter that you could never get from an email.She noted  how her city is so hectic yet she is trying to slow down and enjoy life as it is.Letters are indeed a nice way to relax and not have to worry about the outside world.

Along with Qinyi's lovely letter,she enclosed a postcard of an art exhibition,which can be seen below: 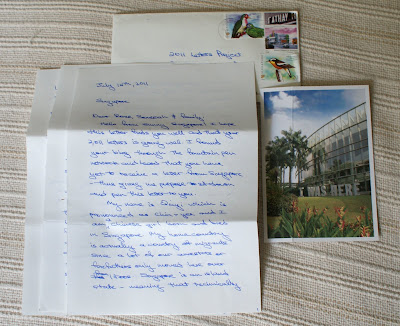 Email ThisBlogThis!Share to TwitterShare to FacebookShare to Pinterest
Labels: singapore