Letter #272 comes from Helen in Australia.Helen lives in a rural area in Southern Tasmania.Tasmania is the island off the south coast of the mainland of Australia.Tasmania is a very popular tourist destination as most of the island is a National Park,with one-fourth of the state being inhabitable wilderness.

Tasmania is also the native home of the Tassie Devil and Helen says that he is just as bad as his cartoon namesake. ;) She says they make a screeching noise when they get angry....probably like in the picture below. :)

Helen has enclosed some photos of Tasmania for us,including the beautiful beach of Wineglass Bay on the east coast,one of the typical rainforest terrain in the west coast area,a picture of the town she lives in (looks like the view of a postcard...so beautiful!) and also a picture of the lovely Tasmanian Devil that looks like someone has just made him angry! :)

Thanks Helen for your lovely letter and photos,which can be seen below: 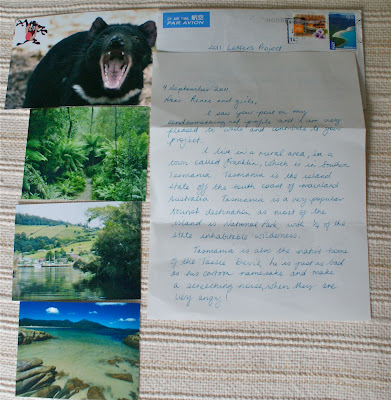