Letter #275 comes from Phoebe in Pennsylvania.Phoebe is a live -in nanny for two children,although one just left for college.She has been with the family for eighteen years.She lives just outside of Philadelphia.They also have a yellow lab dog named Winnie and also a fluffy orange cat named Snicklefritz (I wonder if they got the name from the kids show called "The Big Comfy Couch"). :) The dog loves to chase the cat around,but the cat doesn't like it and tries to hide from him.

Phoebe's hobbies include papercrafting (mostly making cards and a little scrapbooking),making baby quilts,reading,baking,and sending postcards through postcrossing.She also enjoys sending letters,cards and care packages to deployed troops.She belongs to a couple of military support organizations,such as Tell Them Thanks and Soldiers' Angels.

When Phoebe wrote our letter,she had recently visited the Philadelphia Zoo.They try to visit once a year,but didn't make it last year.She loves seeing all of the animals,her favorite animals are the cats.There is a baby jaguar at the zoo that was born in the beginning of June,so she was very excited to see the new baby and thought it was so cute!Of all the cats,tigers are her favorite because of their coloring.She did say that she doesn't like reptiles,so she never visits the reptile house when they go. :) She asked us if we are near any zoos.We actually never visited our zoo,but have enjoyed the National Zoo in Washington,DC and plan to visit it again when we go back to DC next year since we really loved that zoo and the admission price is great-it's free! :)

Along with Phoebe's lovely letter,she included some stickers,confetti that came out when we opened the envelope (that's always a nice surprise),a brochure and postcard from the zoo,pics of her and the kids which I will leave out for privacy reasons and a pic of her cat and dog.Thanks Phoebe for the great letter and goodies,which can be seen below: 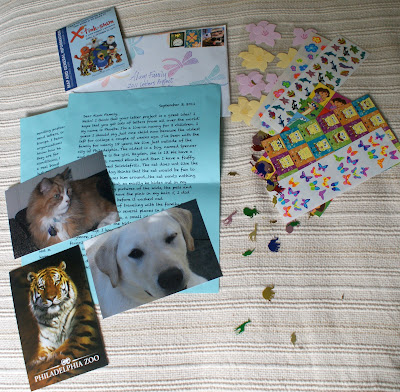