Letter #276 comes from Rossana in Pennsylvania.Yes,another lovely letter from that great state!Rossana is a homeschooler like us and has four daughters.She has always homeschooled all of her children.

She said that they recently had a relative visit them and he rode bicycles with the girls and it got her started riding bikes around again.She bought a trailer to attach to her bike so she could take her youngest daughter with her since she is too small for a bicycle.They plan to ride to local places together,which is a great way to spend time with family,get exercise and save gas and money.One of the places they like to ride to is the library...while we live really close to our library,it's on a major highway so it's not safe for us to ride anywhere,which is a real bummer.

They spent their summer swimming and visiting the library.She says they had just finished doing a flat stanley project with a library in Wisconsin.When we were on our first round of homeschooling,we used to participate a lot in flat stanley projects and I actually still have them after  9 years!It was a really fun project that my girls really enjoyed.I think it's great that the libraries joined together to do this....wish ours did something fun like that.They also have participated in postcard projects and have received postcards from Spain,Germany and London.She said that they are also planning to do a leaf exchange but didn't have the details about it at the time she wrote the letter.

Rossana was very creative with her letter and wrote on various pieces of paper,such as receipts from the library,a chuck e cheese photo paper that didn't print a picture.She also wrote on a postcard from a sculpture garden they visited and also another postcard from another event.She also included a lot of stickers from fruit and veggies that they have collected.She said that they are edible,but I still would rather not eat them on purpose. :) I had to do a double take for the sticker on the bottom corner because I thought they actually were able to buy and then eat black bear,but then I realized it was black bear turkey. :) She even recycled their children's museum brochure and used it as an envelope. :)

Thanks Rossana for your lovely letter and goodies,which can be seen below: 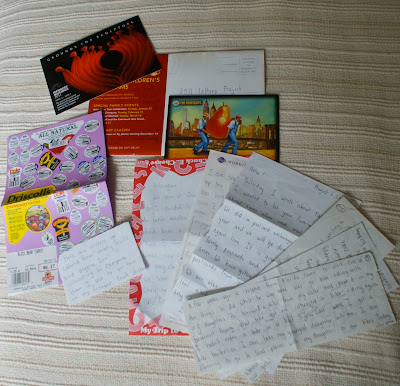