Letter #273 comes from Stephanie in Massachusetts.She lives just ten minutes outside of Boston.She was born and raised in Weymouth,a large town about ten minutes north of where she currently lives....so she hasn't gone far. :) She says that she feels very lucky to be living in the birthplace of America.I couldn't agree more,it must be a great place to live since there is so much history around you all the time....who could get bored there?

She recalls school field trips including one to the Swan Boats in Boston's Public Garden,where you can see a bronze replica of the ducks from the children's book titled,"Make Way for Ducklings".I believe,if I read it correctly,that the ducks were decked out in Bruins gear when they won the Stanley Cup.I wish I could have seen that....too cute!There is also another popular place called The Boston Common,a large grassy park area enjoyed by many when the weather is nice.It includes a frog pond that becomes a skating rink in the winter...all of this in the shadow of the golden dome of Boston's State House.Stephanie says that their original state house,just down the hill from there was replicated by their own Weymouth Town Hall.

Other interesting places she noted that must be seen upon a trip to Boston is The Freedom Trail,a walking path through all the historic sites including Paul Revere's ride,down to Plymouth Plantation and Plymouth Rock.They are also rich in culture and museums,such as Symphony Hall and The Hatch Shell.She also noted that they are home to some of the best colleges,universities and hospitals in the country.

She says that the four seasons there are wonderful.Winter can be extreme,but she wouldn't trade it for anything.It was a wonderful place for her to grow up and has fond memories of the beach,snow,fall foliage, beautiful spring flowers,rich history and beautiful,old homes.Every where you go,there is something to see.I think Stephanie did her state and country proud because you can tell she truly loves where she lives and tries to take in everything the area offers,which is amazing.

Thanks Stephanie for your lovely letter,which can be seen below: 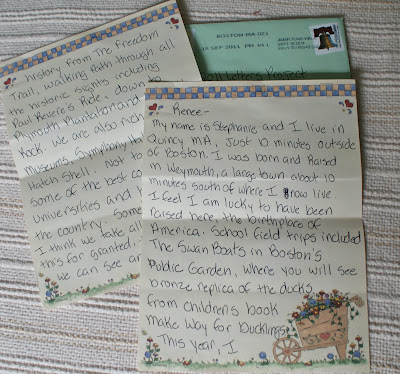