Letter #274 comes from Everett in California.Everett is named after his great-great-grandfather and lives in the Mojave Desert in Southern California.He is fifteen years old and a sophomore in high school.He has one sister and one brother and a chihahua named Jane Doe. :)

He likes to read,write,travel,write letters,act and learn languages (he thought that it may sound bizarre to us as a hobby,but we don't think so at all).Everett can speak German and is learning Swedish on the side and will be taking Russian in school next year.Go Everett!I think all kids should be encouraged to learn another language,it will definitely make travelling to another country much more enjoyable and less stressful when you know the native language.Plus, you can communicate with the people that live there and find out things that you may have missed out on if you didn't speak the language.It will also open the door to many great jobs if you can speak several languages.I find it fascinating when people are tri-lingual (or more) because I think it's great when people do something extra they don't have to do,but do it to gain more knowledge.

Everett likes to collect coins,banknotes (he even graciously gave us a $2 bill!) and stamps (we love those,too).He says he was in four plays last year and had another audition...hope he got the part!The play was Robin Hood....wonder if he was trying for the lead role?

He says that he lives in the desert,where the temps have been in the 100's!He talked about it cooling down and that was to 102°! :) He also mentioned that he lives where there are Joshua Trees,which grow nowhere else in the world.The only thing I know about them was from Pearl Jam,I think,or was it another group that had the cd called The Joshua Tree.

Everett typed our letter on his grandfather's old typewriter from the 1950's.He calls it a dinosaur. :) I happen to love typewriters,too and have a small collection myself.I think they are great for letters since it's something people don't expect others to use anymore.Everett loves writing letters so much that he thinks that half the mail that comes out of Southern California is from him!Way to go....wish everybody was as loyal a letter writer as him so we can save our beloved postal system.I love letters and writing so you won't see me tweeting or texting (never did both) and I don't really care for email as my main communication with people.I think when you write a letter to someone it shows a real concern about that person and that you can form a deeper relationship with that person than by reading emails which can sometimes be interpreted incorrectly,unless you were to put a sad or smiley face by the comment to help the reader know what you meant. :)

Everett included a picture of a Joshua tree,another one that shows the area he lives in,one of the state flag,a $2 bill for us to start our own collection,some bubble wrap for us to have fun with and his little sister wanted us to have a beautiful green feather.Thanks Everett for your letter and goodies...we love them all!Also,best of luck to you in school and learning different languages.Keep working hard,you sound like you will be a very successful adult!Enjoy pictures of his letter and goodies below: 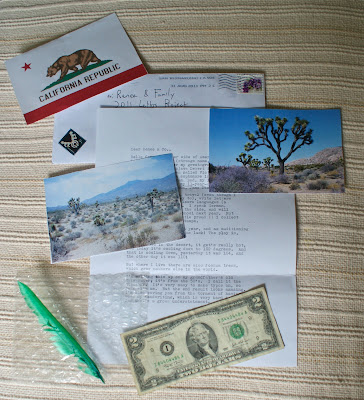