Letter #269 comes from Carissa in Georgia.This was yet another unusal letter.When we opened it,it looked like one of those renewal cards you always find falling out of magazines,so we were really confused why this would be in an envelope.We then realized after turning it over that Carissa's mother had these printed out for her after finding out about her project.

Carissa is also doing a wonderful letter project where she is writing 365 letters in a year- one letter a day to a unique person,so we felt very honored to be chosen as a unique person to have a letter written to by her.On the card her mother printed out,shows pictures of Carissa doing some of her favorite things,such as baking .She said that she works for Williams Sonoma,so she gets to do some baking for her job,too.Ok,I hope she gives me more details about that job because my children and I love to bake and to have a job involving baking,well,that just wouldn't be a job,but I'd take the money and bakeware for it anyways. :) Since Carissa enjoys eating things that may not be good for us,she is happy that she also enjoys running,so she is able to burn off all those calories she earned in the kitchen.She currently runs about 25 miles a week to keep her fitness level high,in the event that she wants to train for something like a marathon.Carissa is a huge Atlanta Braves fan and even had season tickets a few years ago,so they mostly watch it on tv now,although they have gone to two games this year,but she said it was really hot.

Carissa was preparing for a trip to Miami to visit relatives and also spend a few days at Disney World,so she was really excited about it.She is probably back by now,so I hope she had a great time!You can see her lovely letter written on the back of the card that her mother had made for her.Check out that cake she made...isn't it awesome!?! 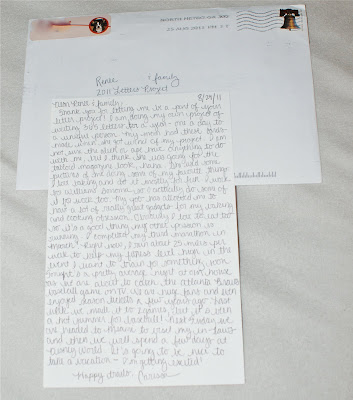 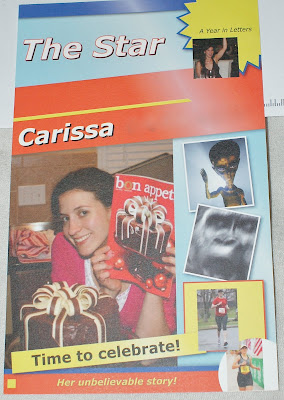 Email ThisBlogThis!Share to TwitterShare to FacebookShare to Pinterest
Labels: georgia