Letter #267 comes from Marian in Lancaster,Pennsylvania,which is most known for their Amish population.She is a college student near Pittsburgh,but when she isn't in school,she's at home in Lancaster.She says that even though she lives in a neighborhood,she is surrounded by farmland and that down the road from her house is a farmstand where they buy their produce.

Marian says one of the great things in Lancaster is their old covered bridges that have a lot of history to them.I can recall seeing plenty of them in books....I always wanted to drive through one of those....especially during the fall as the leaves on the trees are golden colored.She also told us that a traditional dessert from the area is called Shoo Fly Pie.It's a pie crust filled with cinnamon sugar and molasses,with crumbs on top.She says it is very tasty....I have never had Shoo Fly PIe before but should definitely try it sometime.She says she tried making one at home before with her friends,but it burned. :(

Thanks Marian for your lovely letter!Hope you are doing well in college!Her lovely (and colorful) letter can be seen below: 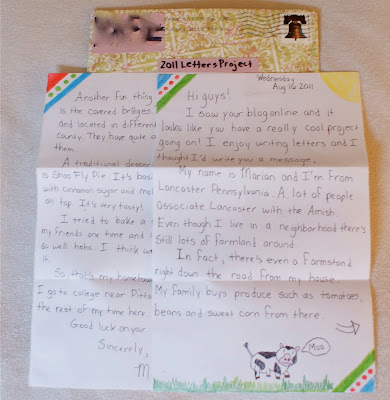