Letter #268 comes from Marti in Indiana.At first,when we saw the envelope and the return address was from a college,we thought some college was trying to recruit my oldest daughter who is a senior this year,so we were quite surprised to find out it was actually a letter for our project!I'm just glad I didn't decide to tear it up before opening it.Marti lives in a small town and works for the college she graduated from...Franklin College.How cool is that to work where you graduated from....it must be a great school if she wanted to stick around after graduation. :)

Her favorite local restaurants are Benjamin's Coffee House,Richard's Brick Oven Pizza and El Nino's Mexican restaurant.She always requests her favorite dish each time she visits each place.I do the same thing...I rarely order anything different than my fave dish,it's the reason I eat out,so I can get my fave dish. :)

She says that they have four branches in their library system and that their local one will soon be moving and expanding...we are still waiting for our new library to open in December,so we know how exciting it is waiting for a new one to open.She also said that their schools have four levels: elementary,intermediate,middle and then high school.That's so different from the three levels we are used to,but I guess it's nice if you don't like a certain school,then at least you know you won't be there that long. :)

Thanks Marti for your lovely letter,which can be seen below: 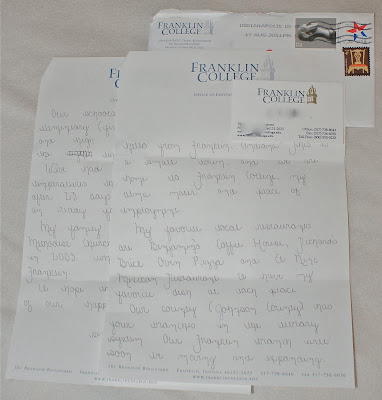 Email ThisBlogThis!Share to TwitterShare to FacebookShare to Pinterest
Labels: indiana